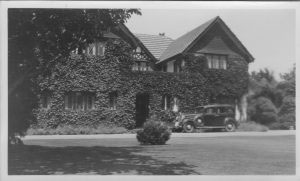 As with so many people involved with Te Omanga, Marion Cooper’s interest grew out of her personal experience. “Many years ago now, I sat beside the bedside of a nursing colleague and a very dear friend who, after a six month battle with cancer, was dying. Her courage, stamina and love for her family had given her the drive to make the last six months of her life a time for living and for preparing her family to manage without her. A gallant fight but now the battle was almost over.

As I sat with Margaret, the effect of her medication had worn off and her distress caused by severe and unremitting pain tore at my heart. “Please ask for more pain relief Marion”. Of course I did – seeking out the Staff Nurse whose response was “she is not due for medication yet, I will give it early this time but we can’t keep on doing this.” This brave friend was seldom free of severe pain until her death several days later and with all my being I cried – “there has to be a better way!”. At her greatest hour of need and after a gallant fight I could not remove her pain nor help her have a peaceful and dignified death.

Eight years following Margaret’s death, there was a better way. A way that provides a new dimension to care of the terminally ill. Not a replacement of general practice, hospital practice or nursing practice, but an added facility and an added strength, where there is no dichotomy between science and compassion, one inspires and nourishes the other. Te Omanga Hospice opened its doors to its first patient on the 6th of September 1979. A lot had happened in the year before to make this event possible.

No 1 Bloomfield Terrace, Lower Hutt was purchased in June 1978. A loan was taken out to cover the total purchase price of $63,000 – an act of total faith. At the opening, Sir Roy & Lady McKenzie gave the hospice a cheque for $30,000 – enough to cover the first three months wage bill and a further grant to establish an Education and Research fund.

53 Laings Road was provided by Hutt City Council at a peppercorn rental as the administration office for the hospice. Max, my husband, ably supported by volunteers, undertook all the administration work. Day Care was commenced two days a week, also from this site.

In 1986 Shirley and Roy McKenzie purchased and gave Viard House to Te Omanga. Sited directly across the road from the hospice, at number 4 Bloomfield Terrace, the new facility was called the McKenzie Education and Research Centre and was used for Day Care services, expanded education activities and administration.

Demand for services was putting considerable pressure on the seven beds the hospice had. There was a need to increase the beds from seven to ten. The opportunity to purchase a magnificent property in the heart of Lower Hutt was too good to miss, and in July 1989 the Trustees made a decision to take up an option on the Cenacle, at 136 Woburn Road. $2 million had to be raised to cover the purchase of the property, the refurbishment of the existing building and the construction of a new ten bed Inpatient wing.

No’s 1 and 4 Bloomfield Terrace were sold. The major trusts such as T G Macarthy were generous. Mayor Glen Evans chaired a committee that organised an impressive number of projects concentrated over four months, which raised a total of $700,000.

In June 1991 Te Omanga moved into 136 Woburn Road. The hospice sat very comfortably in its new home surrounded by magnificent gardens and lawns.

On 14 December 2020 Marion Cooper died peacefully. We are grateful for her vision, passion, tenacity and leadership. Her focus was always on the person being at the centre of care and this is still at the heart of what we do today. She was a pioneer in palliative care and leaves a great legacy for the Hutt Valley and New Zealand.

The original property at 136 Woburn Road had wonderful gardens since 1840, when it was part of the large farm owned by Alfred Ludlam. In 1877 the property was purchased by James McNab, who opened the garden to the public. Day trippers would travel from Wellington to enjoy the park like surroundings, play tennis, have tea in the summer houses or play croquet or bowls on the greens.

In 1901 the new owners renamed the extensive property ‘Bellevue’. The house was turned into a licensed hotel with a regular horse and trap run to bring people from the railway station.

In 1906 the property was subdivided extensively and in 1922 George Cooper purchased three acres, subsequently building the original house on the hospice property in 1927 at the cost of ₤5,065. The Cooper family owned the property until 1940 when, following several changes of ownership, it was purchased by the Carmelites in 1951 as a monastery. In 1953, ownership was taken over by Archbishop McKeefry for the Cenacle Sisters as a retreat house and novitiate.

Te Omanga Hospice Trustees purchased the property in 1991 following a major fundraising campaign within the community. The Inpatient Unit was a new addition at the time and extensive renovations were undertaken.

Following the earthquakes in Christchurch in September 2010 and February 2011, like most buildings, the hospice was inspected for potential earthquake risk and was given until 2023 to either bring the current building up to approved earthquake standards, or rebuild. Te Omanga began a major Capital Campaign to enlist the support of the community for both financial and in kind assistance. The main focus was to ensure the safety of patients and their families, staff and visitors whilst continuing to deliver the best possible palliative care service to the Hutt Valley community.

Sadly the old building came down towards the end of 2017. While the rebuild of a new purpose-built hospice was underway, Te Omanga moved temporarily to 38 Britannia Street in Petone. In April 2019, Te Omanga moved back home to 136 Woburn Road.

Building a purpose-built hospice has given us the opportunity to create something special for our community; a place in which we can continue to provide the very best care, support and lasting life memories for patients and their families for many years to come.

Following the Christchurch earthquakes, Te Omanga Hospice’s building at 136 Woburn Road was assessed as earthquake prone and the decision was made to rebuild it on the current site. The new hospice was completed and officially opened on 11 April 2019. It includes better facilities and improved efficiencies, contributing to our long-term economic sustainability. It is also safer for everyone – our patients and their families, staff and volunteers.

We say a heartfelt ‘thank you’ to our generous community and everyone who has helped rebuild Te Omanga Hospice. Together, we reached our target and raised an incredible $10 million to enable to design and build to happen.

In 2020 Te Omanga Hospice won two prestigious property awards for the design and build of the new hospice. We are very grateful to have such a well thought out and superbly designed building that will serve the needs of our community for many years to come.